I did a “long” training run today.   I’m putting “long” in quotes, because it was only 13.1 miles.  That’s only half a marathon.  A year ago – when most of my runs were 10 to 11 miles – 13.1 would merely have been somewhat longer than my average run.  Today, however, it’s by far my longest run of the year.  You might say I’m halfway to being able to finish a marathon.

I resumed running four weeks ago, after a layoff of nearly seven weeks.  When my physical therapist first cleared me to begin running again, I wasn’t sure if I was ready.  Those runs weren’t really training, so much as rehabilitation.  My stride felt awkward and off-balance.  I had to force myself to use my hips.  Nothing felt natural, and everything was uncomfortable.

I’ve been running an average of three days a week.  I started with one mile.  Then I gradually increased the distance until I could run seven miles.  Then it was time to start doing long runs.

My goal is to finish the Boston Marathon.  I know I won’t be fast.  I only have two goals.  I want to finish, and I want to be healthy enough to run it without setting back my recovery.

I’ve been going to physical therapy on Mondays.  My therapist works with runners, and he knows mu short-term goal is to run Boston.  He used to live there, so I don’t have to tell him how little time I have to train.  When I saw him on Monday, the first thing he said was, “Four weeks.”

I’ve been doing several exercises to build strength in my hips, glutes and hamstrings, all of which are weak.  Every week, we go over my progress.  Sometimes, he gives me new exercises.  Other times, we make adjustments to some of my exercises to make sure I’m emphasizing the right muscle groups.  We also go over my training plans.  I want to make sure my training plan is realistic.  I don’t want to do too much too soon.  So far, we’ve been on the same page.

One of the exercises I’ve been doing is this supine bridge to work my glutes.  As soon as it started getting easy, my therapist had me start doing it using one leg at a time.  That made it much more difficult.  When I used just my left leg, I could really feel it in my glutes.  Those are some of the muscles I’m trying to strengthen, and they’re much weaker on my left side.  When I did the same exercise using my right leg, I felt it in my quads.  Apparently, I’ve also lost strength in those muscles.

A few weeks ago, he wanted me to do a hip exercise that involved standing on one leg and using my hip to rotate the other leg around me.  Then we found out that I couldn’t stand on one leg without losing my balance.  I just didn’t have enough strength to support my weight with one leg.  Since then, I’ve been working on that.  Once a day, I practice balancing on each leg for 30 seconds.  I have to do it in front of a mirror to make sure I keep my upper body vertical.  At first, I tipped to one side as soon as I lifted the other leg.  With effort, I’m now able to shift my hip enough to maintain my alignment.

This week, my therapist suggested doing this exercise three or four times a day instead of just once.  It’s clearly the area where I need the most work.  He’s also having me do additional motions, like partial squats, while standing on one leg.  These exercises leave me sore, but the strength is gradually coming back.

In the meantime, I’m still running every other day.  When I resumed running four weeks ago, I only had seven weeks until the Boston Marathon.  That’s not enough time for a full training cycle.  I had to figure out how best to use the time I had.

The first time I trained for a marathon, I didn’t know what I was doing.  I didn’t follow a training plan.  I just made it up as I went.  I did one thing right.  I emphasized weekly long runs.  I figured if I could keep increasing the length of my longest runs, I’d eventually build up to a marathon.  I also trained that way for my second marathon.  I didn’t have great results, but I finished both races.

The first time I followed a training plan, it came from “Galloway’s Book on Running.”  Jeff Galloway’s training plans emphasized weekly long runs, so they were a good fit for me.  Galloway philosophy is that anyone who’s already running three days a week can train for a marathon just by adding a weekly long run.  If you’re not worried about time, it works.

My training plan for Boston had two parts.  Part one was to get to the point where I could run seven miles three days a week.  Part two was to add weekly long runs.  There’s just one problem.  I don’t have many weeks left, so I have to ramp up quickly.

Last week, I did a 10 mile training run.  That was a big step up, but I was pleased to be able to do it at the same pace as the five mile run I did the week before.  I felt surprisingly good on that run.  For the first time, my stride felt natural.  It wasn’t off-balance, and I didn’t have to force myself to rotate my hips.  The next morning, however, I was so sore I could barely move.

My plan for today was to run about 13 miles.  If I felt good enough, I might step up all the way to 14, but that was asking a lot.  I felt pretty good for the first 10 miles.  Then I started to feel the fatigue in my legs.  As I was closing in on 13 miles, my stride started to feel off balance.  All through my left hip and the left side of my butt, I felt sore.  Those muscles are weak, and they had reached their limit.  If I continued, I would start to limp.  Rather than run with poor form, I slowed down a little and then stopped at 13.1.  It’s not the 14 miles I was hoping for, but I reached the half marathon mark.  That’s an important psychological milestone.

I have three more weeks until Boston.  I’m hoping to run 16 miles next weekend and 19 miles the following weekend.  Then I’ll have to step up all the way to 26.2 on race day.  By then, my hips and glutes should be stronger.  I’m willing to plod along slowly as long as necessary to reach the finish line.  As long as my mechanics are sound, I’ll get there.

While I was running, this arrived in the mail.  It’s my “runner’s passport” for the Boston Marathon.  This is my focus. 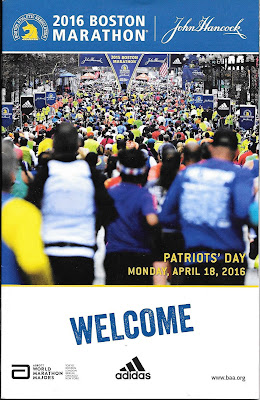 
Last year -- when I was running with injuries for several months -- I was often asked why I didn’t just take a break so I could heal.  I probably would have, if I didn’t already have so many races booked.  Unfortunately, it’s not so easy to wait until the last minute to book a race.

I live in a region where most of the races are clustered around a few weekends in late spring and early autumn.  If I’m willing to drive for eight hours, I can get to races in neighboring states, but their race calendars aren’t much better.  There are very few races in the summer months, but almost none from November until late April.  For more than half of the year, racing means flying somewhere.  That, in turn, means booking at least six weeks in advance to get reasonable airfares.

This year, I’m trying hard to avoid committing to races until I’m completely healthy.  I’m finally healthy enough to begin running, but I have to exercise some caution.  I’m not completely healthy yet.  I’m planning my training one week at a time, after consulting with my physical therapist.

I just committed to two more races.  Booking races when I’m still working to get back in shape obviously isn’t ideal.  Each one was a special situation.

Yesterday, I entered the Prague Marathon, which is just three weeks after Boston.  I was reminded last week by Delta Airlines that I have a certificate that can be used for a first class upgrade on an international flight.  That’s a big deal when it’s an overnight flight.  There’s just one catch.  I have to use it by May 26th.  The Prague Marathon is just two weeks before my certificate expires.  This is a race that’s been on my bucket list.  If I do it this year, I can fly first class.  If I wait, I waste that opportunity.  It’s use it or lose it. 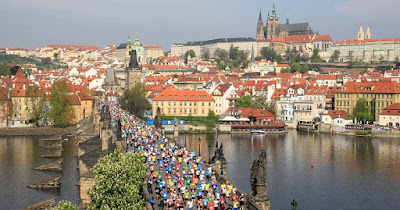 It used to be easy to get into the Chicago Marathon, but now they use a lottery.  You can get automatic entry by running a qualifying time.  The qualifying time for my age group is 3:15.  I don’t know if I’ll ever run that fast again, but the qualifying period for this year’s race goes back to the beginning of 2014.  I had a qualifying time in 2014.  This was another case where I have an opportunity this year that won’t be there in future years.

Today, coincidentally, was the day the New York City held their lottery.  Some of my friends got in.  Others didn’t.  At least one friend was rejected for the fifth straight year.  I don’t want to have to depend on getting into the Chicago Marathon through their lottery, so I’m taking the opportunity to get automatic entry.  Again, it’s use it or lose it.

I’m not too nervous about booking Chicago.  That’s not until October.  Prague makes me more nervous.  I already have an uphill battle to get ready for Boston.  Ideally, I would have waited until after Boston before booking my next race.  Unfortunately, I didn’t have the luxury of waiting that long.
Posted by David at 5:38 PM No comments:

I'm On the World Megamarathon Rankings


Yesterday, I got an email from my friend Diane.  Diane is the North American Coordinator for the World Megamarathon Ranking.  This is a worldwide ranking of the runners who have completed the most marathons and ultramarathons.  To be included on the list, you need to finish at least 300 marathons or ultras.

I know several of the runners on the North American list.  A few of them have been running 100 or more marathons a year for several years, and will probably continue to do so.  They’ll keep climbing the list and improving their rankings.  I have no such ambitions.  Getting my name on this list was a big long-term goal, but I'm content with simply being listed.

In the last three years, I ran more than 50 marathons per year.  It took a toll on me.  Last year was particularly difficult, as I ran with injuries for nearly seven months.  Now I’m taking a break to get healthy.

This year, I’ll only run a handful of races.  If I get back in shape and stay healthy, that may increase a little next year, but I probably won’t go back to racing every weekend.  A few years ago, I found I could race and recover well on an every other weekend schedule.  That’s probably the most I’ll do in future years.  I’d like to strike a balance between racing often and racing well.
Posted by David at 2:49 PM 2 comments: