Race Report: Run Down the Aisle


This morning, I attended the wedding of Heather and Patrick.  Then I joined them for an eight hour ultramarathon.  Heather and Patrick are both runners.  When they got engaged, they decided to get married at a race.  After searching for an existing race that met their needs, they decided to organize their own race.  I’ve run other races where Heather was the race director, so I knew she already knew what she was doing.

The race was called Run Down the Aisle.  The course was a 0.55 mile loop through George Pierce Park in Suwanee, GA.  Everyone had eight hours to run or walk as far as they could.  This was a good format for a social occasion.  Friends who weren’t avid runners could participate by running or walking one lap.  Those wanting to run a marathon had a generous time limit.  Finally, since we were all running on the same short loop, we kept seeing each other all day.  Fixed time races give you lots of opportunities to visit with other runners.

I flew to Atlanta the day before the wedding.  I stayed at a hotel in Duluth, which is northeast of Atlanta, along I-85.  From there, I had to drive about seven miles to get to the park.  Packet pickup started at 6 AM.  The ceremony started at 6:30.  The race bibs had a custom design for the wedding. 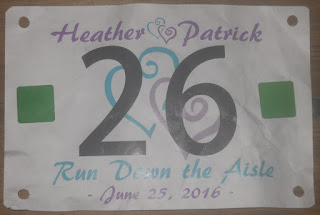 In addition to our race bibs, we each received a goodie bag. 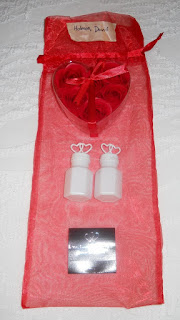 The ceremony started at 6:30.  It was a simple ceremony in front of a pond near the pavilion where the race started.  Heather and Patrick’s daughters were flower girls. 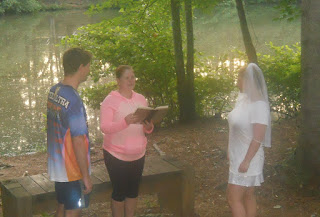 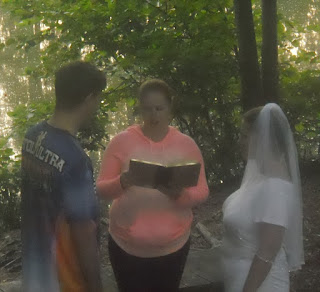 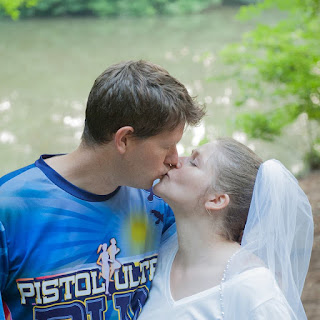 The race started at 7:00.  I haven’t really trained for an ultramarathon, so my goals were modest.  At a minimum, I wanted to run at least 26.2 miles.  Ideally, I wanted to run 50K.  Eight hours is normally plenty of time to run that far, but I didn’t know how much the heat would affect me.  Did I mention the race was in Georgia?  When the race started, it was 79 degrees with a heat index of 86.  The temperature was forecast to climb to 97 during the race, with a heat index of 106.

I had two rules for pacing myself.  First, I never ran more than one full lap without taking a walking break.  Second, I never walked more than one full lap before resuming running.  The point of the first rule was to keep me from going too fast and blowing up in the heat.  The point of the second rule was to keep me from giving up when it got uncomfortable.

Heather and Patrick led us on the first lap.  It was a casual pace, which probably helped me to pace myself well in subsequent laps.  Starting with my second lap, I took a one minute walking break at the start of each lap.  There was a footbridge over a culvert, and I noticed my walking breaks always took me to the bridge.  After that, I just walked to the bridge, so I didn’t have to keep looking at my watch.

The course didn’t have any big hills, but most of it was undulating.  On one section, we ran alongside a parking lot.  That section was slightly uphill, and it was also exposed to the sun.  I worried about overheating here if I tried to run it too fast.

That hill was followed immediately by a long downhill section with good shade.  This was my favorite part of the course.

I brought an insulated bag filled with ice cubes, so I could put ice in my hat.  As the ice cubes melted, the cold water filtered through the flap on the back of my hat and into my singlet.  I started doing this about one hour into the race.  After that, I refilled my hat when the ice cubes finished melting.  I was drinking after even-numbered laps, so I tried to fill my hat with ice on odd-numbered laps.

I also brought a supply of electrolyte capsules.  There are several adaptations that take place when you train to run in the heat.  Your sweat because less salty, so you don’t get depleted of electrolytes as quickly.  I’ve read that runners who are well-adapted shouldn’t need to ingest salt during a race.  Unfortunately, that doesn’t currently apply to me.  I’ve done a little training in summer heat this year, but not enough for significant adaptation.  When I finished a hot marathon two weeks ago, my skin was caked with salt.  Today, in addition to paying attention to my fluid intake, I also took electrolyte capsules every hour.

I finished 10 laps in the first hour and 10 more in the second hour.  I was averaging 5.5 miles per hour.  I didn’t expect to sustain that pace, but I felt surprisingly good.  The walking breaks were effective for dissipating excess heat.  The ice in my hat was also helping.  I stuck to the same pacing strategy for the first half of the race.

We were in a public park, so there were other people using the park too.  I kept expecting someone to ask what kind of event this was.  I really wanted to say, “It’s a wedding reception.”  Nobody asked.

I finished my 40th lap just before the four hour mark.  The next time I came around, I saw we were switching directions.  The sections that were uphill were now downhill.  That was the good news.  Unfortunately, the sections that were downhill before were now uphill.  On balance, I thought the course was more difficult after switching directions.  Of course, it was also getting hotter.

There was now a long gradual hill at the beginning of each lap.  I adjusted my walking strategy to walk to the top of this hill before running.  I was probably walking twice as far now, but that was overdue.  I already had 22 miles under my belt, and it was getting hotter.

I finished my 48th lap in roughly 4:50.  That lap put me over the marathon mark.  It’s worth noting that 4:50 is better than three of the four marathons I’ve run this year.  I was surprised by my pace, but I was holding up OK.

Most of the time, I just drank Gatorade at the aid station, but it was time to treat myself to some solid food.  This was the first time I’ve run a race where the aid station food included wedding cake. 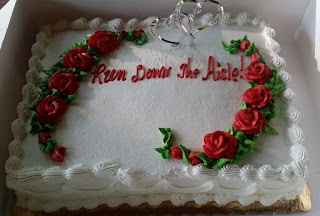 After finishing a marathon, I switched my focus to reaching 50K.  I needed to complete nine more laps.  I was noticing the heat more now, but I stuck to the same run/walk pattern.  I planned to do much more walking later, but I wanted to get to 50K first.  Another runner asked me if I was going to stop at 50K.  I said, “Nope.”  Then I added, “Hell, no!” (with a side order of extra Hell).  I knew I could finish 50K, and I was now determined to run whatever I could after that.

I finished my 57th lap in roughly 5:52.  Last year, I ran three 50K races while nursing injuries.  They all took at least seven hours.

I had a little over two hours to go.  By now, it was 97 degrees.  I was feeling it.  I had to do more walking.  For the rest of the race, I only ran the downhill sections.  Where it was flat or uphill, I walked.  Despite the reduced pace, I had to drink more frequently.  After a lap, I was already thirsty again.

The end of each lap was exposed to the sun.  The pavement was heating up.  On this section, I felt heat radiating from the pavement (as if it wasn’t already hot enough).

I slowly piled up additional laps.  There were only a few runners who continued past the 50K mark.  I couldn’t run as fast as before, but I was now competing for the win.

Pizza was delivered at noon, but I was too busy running to stop and eat any.  With 17 minutes left in the race, I finished my 70th lap.  I knew I didn’t quite have time to run two more laps.  I had more than enough for one, so I stopped to get a small slice of pizza.  I probably should have eaten it at the aid station.  I had enough time.  Instead, I ate it while walking.  That was a mistake.  Eating while walking took too much extra effort.

When I finished my 71st and final lap, my watch read 7:52:48.  That really doesn’t matter much.  My official time is eight hours.  What matters in a fixed time race is how far you run.  My 71 laps gave me a total of 39.05 miles.  That’s my longest run of the year by almost 13 miles, and I did it in oppressive conditions.

39.05 miles was good for first place overall.  I won my first ultra of the year.  The cool part of winning a one-time event is setting a course record that will never be broken. 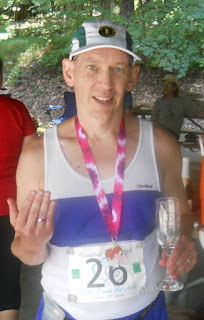 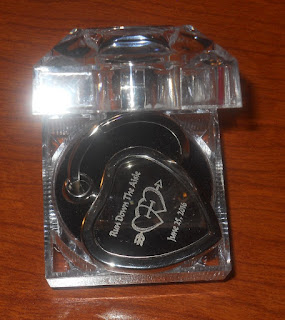 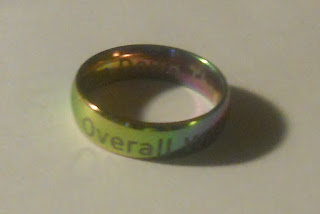 I told Heather this was the coolest wedding reception even.  It was also the hottest.  I’m still stunned that I held up so well in the heat.  Two weeks ago, I struggled badly in a marathon that wasn’t nearly as hot.

Clearly, my endurance is coming back faster than my speed.  This will probably be my only ultramarathon this year.  My focus for the rest of the year will be improving my marathon times and qualifying for the Boston Marathon.  Still, this gives me hope that I can make the transition back to ultras next year.
Posted by David at 7:13 PM