How Did I Do That?

I recently completed a series of 20 marathons on 20 consecutive days.  A few people have asked me how it’s possible to do something like that.  I promised I would write a post on that subject.  Here it is. 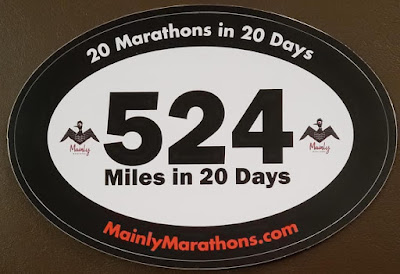 Most people have the perception that it takes weeks or months to recover from a marathon.  There are two reasons for that.  The first reason is that elite runners give themselves months of recovery time before doing another marathon.  They do that because they need to be at their absolute peak on race day.  It’s not enough to be healthy and fit enough to simply finish a marathon.  If your livelihood depends on winning races, and you’re competing with the best runners in the world, you can’t afford to be slow by even a minute or two.  I wasn’t trying to compete at that level.  On average, I was running times that were a full hour slower than what I would do in a standalone race.  If necessary, I could’ve slowed down even more.
The second reason people think it takes a long time to recover from a marathon is because of the way most people train.  Most people never run farther than 20 miles in training.  On race day, they’re pushing their bodies way beyond what they’re used to.  Your body adapts to what you do frequently in training.  If you don’t routinely run 26.2 miles in training, then it’s only natural that running that far in a race is going to leave you feeling like you got run over by a truck.
When I started running marathons, I trained just like everyone else.  The day after a race, I could barely walk down a flight of stairs.  The turning point came when I joined Marathon Maniacs.  That's a club that's all about running marathons frequently.  I was skeptical about running marathons every week or two, but I gave it a try.  It took about six months to adapt to it, but once I did, I found I could run a marathon and feel just as good the day after a race as I did the day before.  Marathons became my long training runs.  The more often I ran them, the less they took out of me.
The notion that you can only run one or two marathons a year is a reality for most people, but only because of the way they train.  It’s a self-fulfilling prophecy.
I know some people will say I can do this, but they never could.  I ran faster than the other people who completed all 20 marathon, but it’s worth noting that I was also one of the youngest runners.  In fact, of the eight runners who finished marathons every day, only Trisha was younger, and she ran every race carrying an American flag for 26.2 miles. 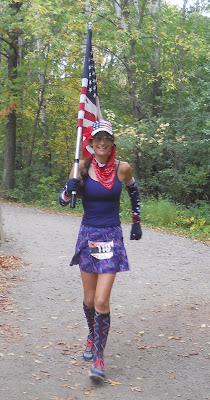 I think I’m also at the Goldilocks age.  I’m old enough to have a lot of experience, and I’m retired, which allows me to devote more time to training.  Still, I’m young enough that I don’t have any major health problems.  I've slowed down some with age, but I haven't slowed down dramatically.
Posted by David at 3:44 PM