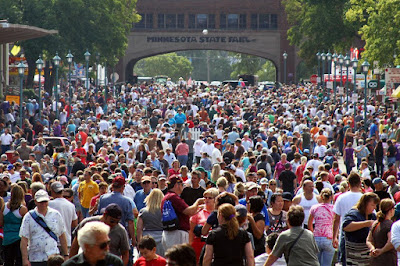 Every year, the local TV stations send their news teams to cover the state fair.  I suspect they treat it as big news, because reporting live from the fair gives the local newscasters an excuse to attend the fair as part of their jobs.

In all fairness, I won’t complain about it this year.  Last year’s Minnesota State Fair was cancelled because of the pandemic, so it really will be news when the fair returns this year.

Today, I’m guilty of my own “the sun rose this morning” headline.

Why is that news?  After all, I’m a runner, and this is a running blog.  It’s news because it’s the first time I’ve done any running since January 31.  That’s more than four months.  I couldn’t remember when I last went that long without running.  I had to look it up.  It was more than 36 years ago.  Even after having back surgery four years ago, I only went about three months without running.

In February, I took a long-overdue break from running, so a knee injury could heal.  I wasn’t going to run again until I could walk up and down stairs without discomfort.  I thought it would take two months.  It took longer.  When I was still sidelined after two months, I started doing race-walking to get back in shape.

My knee is actually coming around, but about a month ago, I suffered a lower back injury.  The doctor said I could try race-walking and see how it feels, but I should hold off on running.

At first, I had to limit my walking pace to 15 minutes per mile or slower.  Anything faster than that caused inflammation in my lower back.  My back has gradually improved.  Now I can walk as fast as 12 minutes per mile without it bothering my back.

About a week ago, I was finally able to walk up and down stairs with little or no discomfort.  I thought my knee was finally ready for running, but I didn’t know if running would be OK for my back.

On Thursday, I had a physical therapy appointment.  My therapist thought it would be OK to try running for a minute or two at a time during some of  my walks.  During that same appointment, I did a few single-leg quarter squats.  That was a wake-up call.  I could do squats comfortably using both legs, but when I supported my weight with just my right leg, I felt soreness in my knee.  Later in the day, I started noticing soreness on stairs.

Today, I tried running for the first time.  I would’ve tried running yesterday, but I was still having a little discomfort going down stairs.  This morning, the stairs felt more comfortable, although they still didn’t feel perfectly comfortable.

I chose a one-mile loop through my neighborhood.  It’s relatively flat, but there’s a stretch that’s slightly uphill for about a quarter mile.  I walked at a brisk pace until I reached this uphill section for the first time.  Then I started running.  I limited my running to the uphill section, because you don’t strike the ground as hard going uphill.  If that’s not obvious, think how you feel when you run down a hill.  It’s easy, but there’s more pounding on your joints.  Running uphill is the opposite.  It takes more effort, but there’s less impact.

As I ran, I took short strides, to further minimize the impact.  Right off the bat, I could feel a little soreness along the top of my right knee. I continued running until I reached the top of the hill.  Then I switched to race-walking for the rest of the loop.

I did the same thing on my second lap.  This time, I didn’t notice as much discomfort in my knee.  I might not have noticed at all, but I could discern a difference between my right knee and my left knee.

Over the next day or two, I’ll pay attention to how my knee feels going up and down stairs.  The running itself, however, told me most of what I need to know.  I’m not ready to run yet.

There was good news.  Running didn’t seem to bother my lower back at all.  Over the next day or two, I’ll also pay attention to how my back feels doing my other daily activities.

I’ll wait about a week, and then I’ll try this again and re-evaluate how my knee feels.  In the meantime, I’ll go back to race-walking.