Today was day 4 of the Summer Camp Series.  Today’s race is also known as Wandering Wolf.  The course was a section of the Beaver Islands Trail that was just south of River Bluffs Regional Park in St. Cloud.  It was an out-and-back route.  To complete a marathon, we needed to do 14 laps. 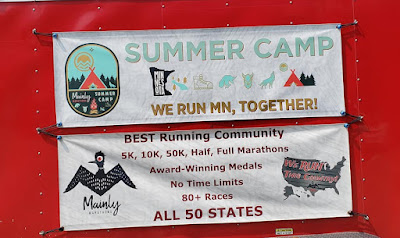 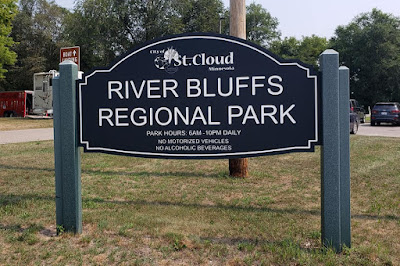 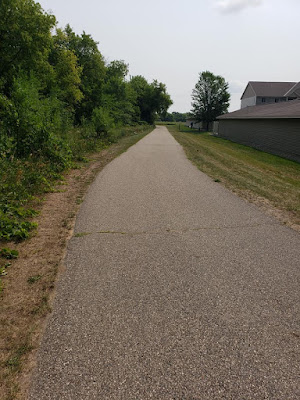 I had trouble sleeping last night, because one of my toes hurt when it rubbed against the sheets.  When I got up, I drained the blisters under the toenails of both big toes.  I’ve been doing that twice a day, but there’s always more fluid.

Despite my best efforts, I wasn’t able to drain much fluid from the blister on my left heel.  There’s a thick bump there, and I can’t flatten it out.  There’s a spot that’s sensitive to pressure, and that bump ensures there’ll always be extra pressure there when I walk.  On Monday, I was feeling it even when I walked at a casual pace.  I knew that would be an issue today, but I just had to tune it out.

The regular start time was 6:00, but there was an early start at 5:00.  I didn’t expect it to be as hot today as it was on Sunday, but I still took the early start.  That’s what most people were doing.

Last Friday, I learned that I can walk a marathon in 5:15 with an all-out effort.  On Sunday, I learned that I couldn’t expect to bounce back and do the same thing after only one day off.  Today, I was hoping to learn what pace I could sustain without blowing up, when I already had tired legs.  I was guessing that pace would be somewhere between 12:30 and 13:00, but I wouldn’t know for sure until I tried it.

I was conflicted about whether to wear a GPS watch or a plain stopwatch.  On one hand, it would be nice to see every mile split, so I could associate how I felt with a precise pace.  The problem with that is I tend to get preoccupied with my pace instead of paying attention to how I feel.  I opted for the GPS watch, so I would know if I started walking too fast.

We started about 45 minutes before sunrise, but there was enough ambient light that I could see the trail without carrying a light.  As I started walking, I quickly got into a nice rhythm.  I wasn’t trying to walk as fast as I did in my last two races, yet there were only two people in front of me.  One was Tim, who was the only person to run the entire race.  The other was Jesse, who was leading us through the first lap.  Everyone else was either walking or doing a run/walk mix.  Apparently, they all started out walking.

Because of the blister on my left heel, I was reluctant to let my heel make contact with the ground.  For most of the first lap, I was walking on the balls of my feet.  That shortened my stride, but I seemed to have a fast enough turnover to maintain a descent pace.

By the end of my first lap, I was sometimes making contact with my heel.  When I did, I felt the blister.

By the end of my second lap, I was rolling through my whole foot, instead of staying off my heel.  That was inevitable.  It caused some discomfort from the blister on my heel, but now that I was in a nice rhythm, it was getting easier to tune out the pain.

I was in the second half of my third lap when the 6:00 runners started.  Most of them were doing the 5K or 10K, but there was at least one additional runner doing the marathon.  Later in that lap, Tim lapped me.  He would go on to lap me two more times, but nobody else ever passed me.  Despite walking the whole way, I was the second fastest person in the marathon.

When I finished nine miles, it occurred to me that I was more than one third done.  I compared how I felt today to how I felt at the same point in Sunday’s race.  It was an easy comparison.  On Sunday, I was already running out of gas at this point.  Today, I was under control.  The pace I was walking took some effort, but the effort seemed sustainable.

In the middle third of the race, I started to notice some sore muscles.  I’m used to having soreness in my glutes, hamstrings, and/or shins. Those are all things I experienced at different times in my other races.  Today, I also had soreness in my quads.  I don’t usually get sore quads when I’m walking.  I think it’s because of the undulations in the course.

Earlier in the race, my impression of the course was that it was flat.  When Tim passed me in lap three, he made a comment about the hill being tiring.  I didn’t notice the same hill until the next lap.  The course was actually rolling.  There was one particularly long section that had a gentle upgrade.  I found myself working harder here.  In the opposite direction, this section was downhill.  It was here that I was most apt to notice soreness in my quads.

By the halfway point of the race, I was no longer confident that my pace was going to be sustainable.  For now, I could keep my pace within my target range, but it was starting to take more effort.  I was confident, however, that it wouldn’t be a struggle to finish the race.  That was a big improvement over how I felt on Sunday.

We occasionally went under trees, but most of the course was exposed to the sun.  Fortunately, we had some cloud cover.  We also had a breeze.  That helped a lot.

When I finished my 18th mile, I was more than two thirds done.  For the third time, I compared how I felt today to how I felt on Sunday.  I was having to work harder, but I was still keeping my pace in the same range.  On Sunday, by contrast, I had given up on maintaining my pace.  In the last third of Sunday’s race, I was just trying to finish.

At some point, I started to feel pain from the big toe on my left foot.  That was both good news and bad news.  Obviously, any time you have a new pain, that’s bad news.  Why was it also good news?  I no longer noticed the blister on my heel.  I also no longer noticed any sore muscles.  When you have multiple aches and pains, you tend to notice the one that’s screaming the loudest.  I wasn’t happy about the pain in my toe, but it was actually a welcome change of pace to feel that instead of my heel.

The breeze became more noticeable, but it depended which direction I was walking.  In the first half of each lap, I tended not to notice it.  In the second half of the lap, it had a really nice cooling effect.  That made the two halves of each lap feel different, both physically and psychologically.  When I started a lap, I focused on how many laps I had remaining.  When I reached the turnaround, I looked forward to enjoying the breeze on the way back.

With two and a half laps to go, I glanced at my watch.  I’m not sure why I did that.  I was reading splits at each mile, not by lap.  Still, I noticed the total elapsed time.  By now, I had an idea how long it would take me to finish the race.  If I was correct, I still had more than an hour to go.  Two and a half laps sounded manageable.  Having more than an hour left didn’t.

As I finished my 12th lap, I finally felt like the remaining distance was something I could easily handle.  After slowing down to drink some Gatorade at the aid station, I really launched myself into the next lap.  As a result, my next mile was a few seconds faster than my target range.  Normally, I would’ve eased up a bit in the next mile, but I maintained the same effort.  At this point, I was no longer worried about wearing myself out.  I didn’t work hard to keep up the same pace, but I also didn’t go out of my way to slow down.  The result was that my next mile was also in the 12:20s.

I did the same think at the start of my last lap, and I had the same result.  My last two full miles were also in the 12:20s.  That’s four straight miles that were below my target range for pace, but none of them was faster than 12:25.

I kept up the same effort until I came around the last corner and saw the aid station.  Then I walked as fast as I could to the finish.

I finished in 5:33:16, which was good for second place overall.  When I thought the last two and a half laps would take more than an hour, I was wrong.  I didn’t realize they would be my fastest laps of the race.  I was assuming the second half of the race would take at least as long as the first half.  Instead, the second half was three minutes faster. 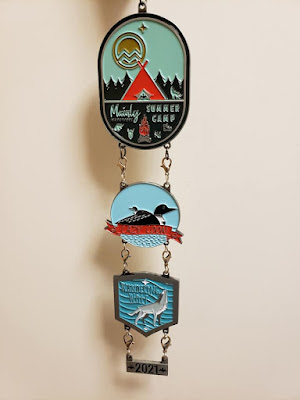 After the race, I was winded.  I was under control until the last tenth of a mile.  It was my fast finish that left me out of breath.  I spent longer than usual rehydrating and talking to people in the finish area.

When I got back to the hotel, my quads were unusually sore.  That’s normal after running, particularly after an all-out effort.  I don’t usually have sore quads after walking.  Also, this wasn’t an all-out effort.  I felt better after a hot bath and some stretching, but I’m looking forward to a rest day tomorrow.

Today’s race was slower than my last two, but I felt like it was a success.  I did a good job of keeping my pace in a sustainable range.  I have a better idea now how I should pace myself during the Alaska Series.