The Super Bowl Will Feel Different This Year

In 2012, I ran the Surf City Marathon in Huntington Beach, CA.  The race was on the same day as the Super Bowl, so I watched the game in the hotel lounge, along with several other people who were staying there.  Giants fans sat around one table, and Patriots fans sat around another table.  It was an exciting game, with New York winning on a late field goal.

That was the start of a tradition.  Since then, I’ve done the Surf City Marathon five more times.  It’s one of my favorite races, but that’s not the only reason.  The race is always on Super Bowl Sunday, and I realized I enjoy watching the game in the Pacific Time Zone, because the game starts earlier there.

Even when I didn’t run the Surf City Marathon, I was usually running a race that day.  In 2014, Deb and I traveled to New Orleans, and I ran the Rock N Roll New Orleans Marathon.  That was the year the Seattle Seahawks won.  That game was exciting because Deb is a big Seahawks fan.

In 2017, I ran the Rocky Raccoon 100.  That’s the year the game was in Houston, and Houston happened to be the closest airport to where I ran running.  It was the first time I’ve ever seen cheerleaders in an airport. 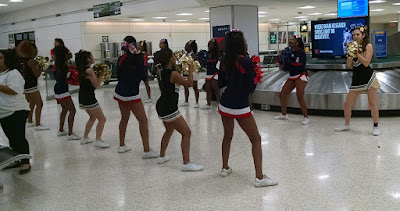 The only recent year I wasn’t doing a race that weekend was 2016.  That year, I was recovering from injuries.  At the time, I couldn’t even walk normally, much less run.  I didn’t get clearance to start running until three weeks later.

This year I’m also recovering from injuries, but that’s not the only reason I’m home.  Even if I was healthy, I wouldn’t be at the Surf City Marathon.  It’s been postponed to September, because of the pandemic.

There’s one other reason the Super Bowl will feel different this year.  The Tampa Bay Buccaneers are playing in their home stadium.  No team has ever had home field advantage in the Super Bowl before.  That’s all the reason I need to root for Kansas City.