A Progress Report on My Recovery

A little over a year ago, I met Meb Keflezighi at the Atlanta Marathon.  At the time, I was reading his book, “Meb for Mortals.”  I told him how much I liked the first chapter.  It's called “Think Like Meb,” and it’s about setting goals. One point he makes is that once you establish a goal, it’s important to periodically evaluate your progress. 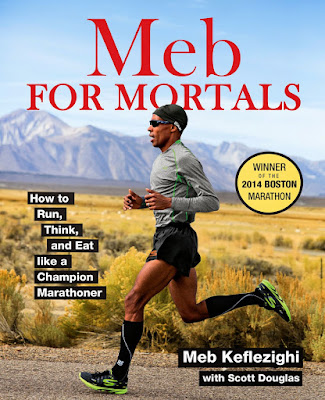 I’m currently recovering from a knee injury that has plagued me since last August.  My long-term goal is to recover from this injury and to regain the fitness level I had last summer.  This goal has three components: recovering from the injury, losing the weight I gained while I was inactive, and getting back in shape.  So how am I doing?

I haven’t run since January 31.  That was the day of my last marathon.  I don’t have any other races scheduled, so I’m taking as much time off from training as I need for my knee to heal.

In early February, after taking a week off, I resumed my physical therapy.  In addition to my exercises, I was walking a minimum of one mile a day and doing five minutes of low-resistance spinning every other day.

At first, my knee was actually getting worse.  For the first time since I injured it, it sometimes bothered me even when I was just walking to the bathroom.  I began to wonder if I injured it more seriously in my last race.  I was getting discouraged, but I decided to give it another week or two before going back to the doctor.

Then I had an epiphany.  One night, I got up during the night to go to the bathroom, and my knee hurt.  As I climbed back into bed, it occurred to me that it didn’t hurt before I went to bed.  Then I realized the only times it hurt while walking on level ground were in the morning or during the night.  I had been assuming I was aggravating my knee by something I was doing during the day.  I was actually aggravating it while sleeping.

I usually sleep on my stomach, so my knee is pressed against the mattress.  Rolling over during the night with all my weight on it probably wasn’t doing it any good.

After that, I made an effort to sleep on my side.  I didn’t sleep as well, but it made a difference.  After that, my knee never hurt while walking around at home.

Over the next few weeks, my knee got better, but the change was gradual.  My knee still bothers me going up and down steps, but I’m not as dependent on using a railing.  I’ve been going a little longer each time I ride the stationary bike.  This morning, I was spinning for 18 minutes.  Finally, I’ve increased my walking to four miles a day.

On Monday, I had my annual physical.  Naturally, I asked my doctor about my knee.  After my exam, I told me he was pretty sure nothing was torn, but he ordered an MRI, just to be sure.  The MRI showed some fluid in my knee, but there’s no damage to the joint, and all the ligaments are intact.  This is still an injury that will heal with rest, ice, and physical therapy, but it’s going to take time.  My doctor thought it would be another month before I could resume running.

Today, I had another physical therapy appointment.  For now, my therapist wants me to limit my walking to four miles a day and keep my stationary bike workouts between 15 and 20 minutes.  In a few weeks, we’ll reevaluate.  In the meantime, I have several new exercises to do.  A few are for my knee, but others will help me maintain strength in my legs until I can resume running.

This brings us to the second part of my goal: losing the weight.

Last summer I was doing at least two workouts per day.  On an average day, I was doing the equivalent of 19 miles of running.  That burns a lot of calories.  After the Running Ragged 20in20 Series, I cut way back on my training.  Unfortunately, I didn’t cut back way back on my eating.  By the end of the year, I gained six pounds.

In January, I made a half-hearted effort to curtail my eating, but I still gained another pound.  Naturally, I was concerned.  At least in January, I was running every other day.  Now, I’m not running at all.

Since the beginning of February, I’ve been keeping track of everything I eat.  I have a strict upper limit for how many calories I’ll eat.  My hope was to limit the damage, but I’ve actually managed to lose a couple pounds.  It helps that I’m burning a few calories by walking.

Dieting has a psychological component.  What works for one person won’t work for someone else.  I’m motivated by measurable progress.  That’s why I got into running in the first place.  I got excited when I could see that I was getting faster.  In the case of sticking to a diet, it really helps to know that I’m making progress.  That keeps me motivated.

To get back to my “racing weight,” I’ll also need to burn more calories.  That won’t happen until I can run again.  In the meantime, losing any weight at all is an accomplishment.

The longer I’m sidelined, the longer it will take to eventually get back into shape.  This won’t be the first time I’ve had to get back into marathon shape after a long period of inactivity.  I had to do the same thing five years ago.  I’m getting more exercise now than I did then, so I’m hopeful.  It’ll take time, but I know I can get back into shape once my knee is completely healthy.  I’m hoping to resume running marathons by August.  I don’t have to be fast.  I just need to be able to finish them.  Getting my speed back will take much longer.