September Is Getting Crowded 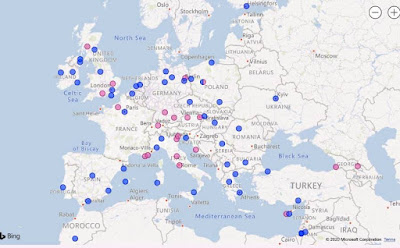 When I looked at this map on Tuesday, I saw a blue dot in Northern Ireland that looked like it could be Belfast.  I went to the website for the Belfast Marathon saw a notice that the race had been rescheduled for September 20.  That surprised me, since I had not yet received the email notifying me of this.


A few weeks ago, this would have been bad news.  Now it was actually good news.  I had already decided I wouldn’t be doing this race, even if it went on as scheduled.  I didn’t cancel my flights yet, but I was hoping the race would get rescheduled for later in the year.  Now I could reschedule my flight for the new date.


As it happens, I woke up early that morning and couldn’t get back to sleep.  That’s been happening a lot lately.  For the second time in three days, I spent the morning rescheduling my flights and hotel reservations.  This one was complicated, since it involved two airline itineraries and two hotels.


So far, I’ve had three races rescheduled and all three of them are were moved to September.  September is going to be a busy month.  That’s assuming, of course, that things are getting back to normal by September.  If not, … I’m really not ready to think about that.  I’m taking things a month or two at a time.


I still have two more races in May.  Both are in Europe.  One is in Riga, and the other is in Luxembourg City.  I’m all but certain I won’t be travelling to Europe to run them. But as with my Belfast trip, I’m not doing anything with my flights yet.  I’m hoping at least one of these races will reschedule for later in the year, but hopefully not on a weekend that’s already booked.  There aren’t many left.


I haven’t had any recent communication from these races, but I check their websites every few days.  The website for the Night Marathon in Luxembourg makes no mention of any possibility that the race might be cancelled.  They’re still taking registrations.  I’m somewhat shocked by that.  Luxembourg, despite being a small country, has already had more than 300 confirmed cases of COVID-19.  More significantly, it borders Germany and France, and they’ve each had more than 10,000 cases.


The Riga Marathon has posted this notice. Although they haven’t cancelled the race yet, I’m sure they will.  They’re hoping the situation will improve, but I expect things to get worse before they get better.  Since they wanted to make this year’s race a special 30th year celebration, they make opt to reschedule it as several other large races have done.  I just hope they’ll get on with making a decision.  I want to know what to do with my flights.
Posted by David at 7:42 PM